In two weeks I’m going back to school. Not a University, not Nursing school, not Art school. I’m going to Beauty School. Part of me still can’t quite believe it. Because on one level, that fact is not in sync with the person I am, or at least the person I’ve always thought I am. Even though I’ve been cutting hair for over 20 years. Even though I love cutting hair as a hobby and I’ve even starting charging for it. Even though my current idol is Jonathon Van Ness, the hair styling fairy godmother from Queer Eye. There’s a little voice in my head that sometimes whispers, “In a world that is literally crumbling, is that the best you could do? Is that truly your highest ambition? To become a hairdresser?” 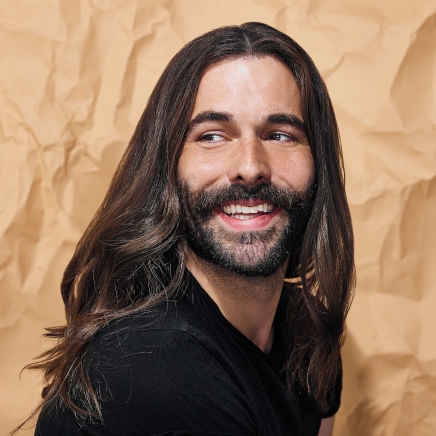 In 2008 I was 26 years old, working at a breakfast restaurant in Chico called The Sin of Cortez. It was a fun place to work, hip and edgy with Mexican inspired brunch and good coffee. Although I’d been a barista before, this was the first place where I had started to get good at latte art. I liked my coworkers and my boss (although the kitchen staff was a bit sketchy). A good multi-tasker, I knew I was well suited for this work, even on the weekdays when my job included hosting, cashiering, serving, and busing in addition to my barista position. But I remember one day when I vowed to myself (and to a nearby coworker) that this would be my last food service job.

My boyfriend (soon to be husband) and I were on the verge of moving to San Francisco to start a new life and see if we could make it somewhere else. I was excited about the move and saw it as a chance to pursue a different line of work. I had been working in mostly restaurants and coffee shops since I was 18, and it seemed time to move on. I didn’t know exactly what I’d be moving on to but I had always been an artist, musician, and a writer and I thought I could pursue those hobbies with more intensity and maybe something would come of it. My sweet boss at “The Sin” offered to write me a letter of recommendation to land a server or barista position in SF but I didn’t take her up on it. I was done with food service so I wouldn’t be needing it.

Once we moved to SF (cramming ourselves into a basement studio in a five floor apartment building in the “TenderNob” district) Benny immediately went to work at Cinematico, an animation studio he had connected with by a Computer Graphics Professor at Chico State. He was thrilled to be freshly graduated and already working a job in his field. Me, I graduated with a BA in Philosophy so I had no set path to follow, only some artistic interests and the ability to think critically about abstract ideas.

One month, two months, three months went by and I hadn’t found work. I knew I had to find something soon if we were going to make it. The rent for our cramped studio was more than the entire three bedroom house (with backyard and fireplace!) that we had been sharing with Benny’s friend and brother back in Chico. I don’t remember what kind of work I was even applying for, but it wasn’t long before I was darkening the doors of nearby coffee shops and restaurants. I applied to Peet’s Coffee and was hired at the 3rd and Mission shop.

Tuesday Tie Day at Peet’s. Not sure why I was compelled to appear so demonic for this photo.

It turned out to be a great job. My coworkers were a rowdy, creative bunch who reminded me of my Drama class pals in High School. The pay was higher than I was used to, I got sick pay and vacation pay, and I enjoyed getting better at espresso drinks. But a part of me felt defeated- new city, same job. I remember once a younger coworker being surprised that I was 27. “I thought you were younger!” she said, and I snapped back in a sort of jokey way, “Oh, because I work at a coffee shop?” I was sensitive to the fact that I was in my late 20’s and still doing the same work as my first job. (My first job was a coffee shop called Pannikin down the street from my dad’s apartment in San Diego.) I was smart, creative, and had a good work ethic- why couldn’t I find a “real” job, something more grown up?

Along the way I made half-hearted attempts at my pursuit of more creative work. I applied to work as an arts and culture writer for The Guardian, a free weekly paper in SF. To do this I had to submit several examples of my work so I wrote a personal essay on folk music and attended a few art and music events and wrote reviews of them. I interned at an art gallery doing things like making the little title plaques that go next to the art and other things… I can’t really remember because that place was so unorganized and somewhat abusive (I got yelled at a couple times for doing things wrong when even though they were never clear about what I was supposed to be doing) that I was there for only a few weeks. After moving to Portland I tried two more internships. One was for a wedding magazine called Oregon Bride and my job was, incredibly, to feature a weekly pair of shoes and match them with a wedding venue (???). As someone who has never worn a pair of heels in her life, I was totally at a loss. My other internship was for a culture website called BePortland (“Don’t just live here- BE Portland”) where I had assignments to go to cultural events, music and art shows, plays, etc., take photos with my nice SLR camera, and after the show go home and compose a well written review/description and upload my edited photos. This was a pretty cool way to get to go to free shows and have an incentive to stay until the end (I had a bad habit of leaving shows before the headlining band because I was sleepy), plus it was rewarding to see my article posted on the website the next day. However, there were downsides to the internship (besides the big one of no pay) and I only lasted a summer.

“Well, I guess my only other option is to get a Master’s in Creative Writing and teach at a community college,” I said to myself. I was working the cheese counter at a specialty foods market when I started my first term at Portland State University, as a Postbaccalaureate since I hadn’t officially made it as a Grad student. I didn’t want to teach necessarily, but I liked writing and reading and knew I couldn’t count on making a living as a writer. Kinda funny that, after not finding meaningful work with a Philosophy degree, I decided that my fall back would be an English degree. I took three terms at PSU and enjoyed my time there until I discovered that there were a lot of flaws in the school system and I didn’t think I wanted to be part of that. Also, after reviewing my peers’ papers, I realized that being a writing teacher would mean reading a LOT of bad writing.

I quit PSU and instead took a 9 month course at the Independent Publishing and Resource Center (IPRC) on Comics. Prior to starting at PSU I had been committed to drawing a daily comic which I had managed to do for ten months until school and homework got in the way. I had missed comics and I wanted back in. “Maybe this is what I’m supposed to be doing,” I thought, and it was certainly a thrill to be assigned comics to read for homework and drawing exercises in class. I hadn’t taken many art classes at Chico State so it felt too good to be true.  At this time I was working at Lardo, a sandwich shop downtown.

The comics class was going really well and I started to wonder if it might become a career down the line. But one night the IPRC had a showing of Cartoon College, a documentary about comics and cartoonists. Many of them, even the big name cartoonists like Chris Ware and Lynda Barry, spelled it out very clearly: you cannot make a living as a cartoonist. That, and the terrible idea that I’d had to sell calendars featuring my drawings of Portland scenes (nobody bought them so I was $800 in the hole and had an embarrassing amount of them stacked around my house), cemented it for me. I would keep my creative life and my work life separate. As separate as possible.

Aaaand then I had a baby. That solved everything. I’m joking, but I’m also kind of serious because it did, for several years make the whole question pretty pointless. My priorities became 1. Take care of this baby, 2. Make money however possible, and 3. Make art if there’s any time left. I had taken time off from Lardo, but a few months after giving birth I was back there a couple shifts a week. When Mina was three I started at another restaurant called Guero which was a big improvement. The people there feel more like family than coworkers, the food is delicious, the space is beautiful, and even the customers are lovely. However, most of my coworkers are younger than me, some even 15 years younger. And, as is the case for almost every restaurant worker everywhere, they’re just working there for now because they’re on their way to somewhere else to do what they really want to do. Food service jobs are a limbo zone, they’re a placeholder. Maybe that’s not so much the case in really nice restaurants, where serious chefs aspire to be. But in places where I work, people are always moving on to something better. I wonder what it would be like to work in a place where people are there on purpose, because it’s their dream, because they worked hard to get there.

I don’t want to be 40 years old and still in limbo. So I’m moving on too. Maybe it’s not the biggest and best thing I could be doing. But the truth is, I’ve never been a big dreamer. I’ve never been attracted to the idea of “making my mark on the world” or “leaving a legacy.” I’ve never wanted to be famous or important. I’ve never been selfless enough to be a savior of humanity, or a pioneer for a purpose. I’ve never had that one thing I just have to do. But I like to cut hair. And I like the kind of conversations I have when I’m cutting someone’s hair. The kind of conversations where things are said, and then there are long silences where I’m just attending to them, touching them lightly on their heads and neck, brushing hair away from their foreheads, trimming carefully around their ears. I like the casual intimacy of it, and the way people are changed before my eyes. I like when they close their eyes and say, “It feels better already.” I like how a weight is lifted. I like at the end when they go into the bathroom to see themselves in the mirror and they call out, “It looks great!” I like how I can be creative and skillful and be helping people at the same time. Maybe I’m right this time. Maybe this is what I’m supposed to be doing. 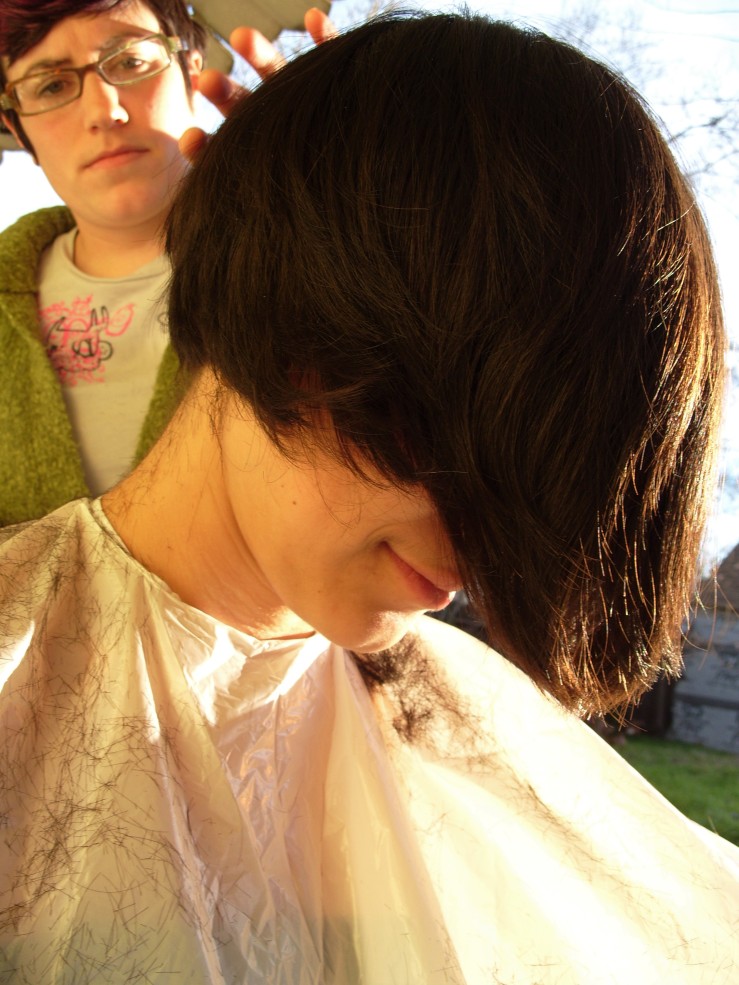 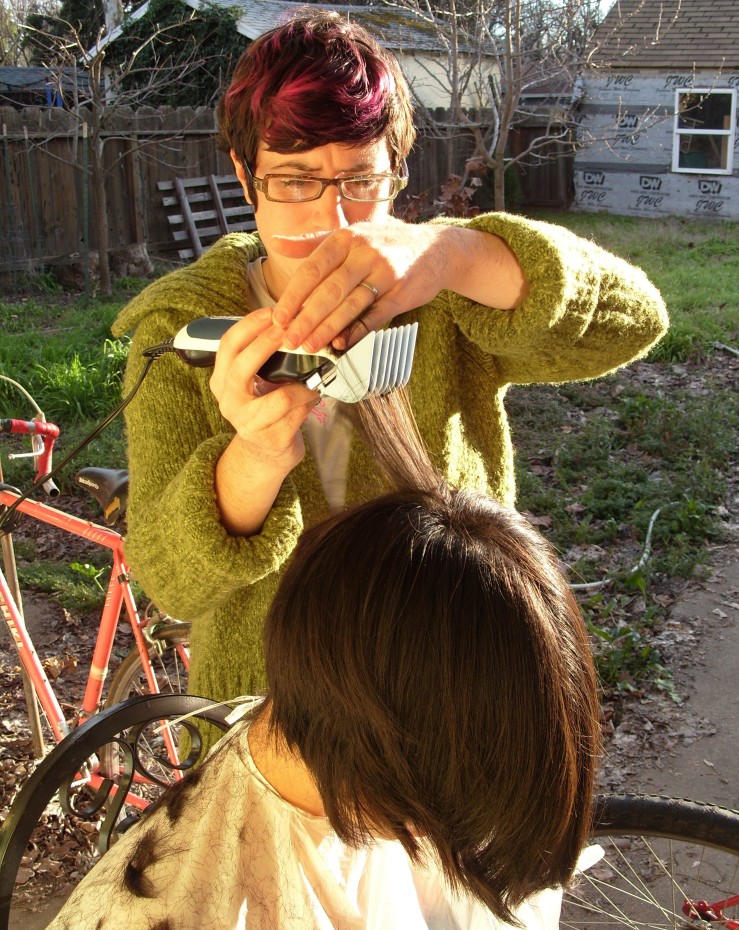